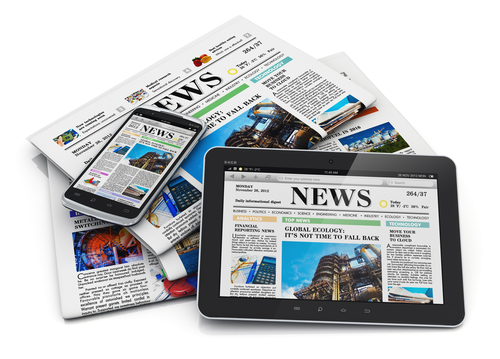 135. Express:  WASPI women have called for clarity on the stance of Tory leadership Rishi Sunak and Liz Truss on the matter of state pension age changes – 25 July 2022

134. BirminghamLive: The government has been refusing to meet the women who were affected by unexpected pension age changes – 23 July 2022

131. Saga Magazine:  It’s a myth that all pensioners are awash with money -especially women, whose pension pots are on average only a third of the value of men’s – 13 July 2022

129. I News:  Baroness Altmann a former pensions minister said “pensioners were betrayed by the suspension of the triple lock, which broke an election manifesto pledge.” – 22 June 2022

125. DailyBusiness:  The WASPI campaign have been trying to meet Mr Opperman since the PHSO confirmed last year that 1950s-born women were victims of maladministration by the DWP – 17 June 2022

121. The Northern Scot: Keith woman speaks out about the hardships she endured due to the delay on receiving her state pension – 8 June 2022

120. Derbyshire Times:  WASPI Chair and Finance Director recognised for her work as part of the Queen’s Jubilee Celebrations – 8 June 2022

116. Grampion Online: Gordon MP Richard Thompson has called on the UK Government to start the process of issuing compensatory payments to WASPI women – 27 May 2022

115. Express:  Many WASPI women born in the 1950s have faced similar financial dilemmas due to state pension age changes – 13 May 2022

113. Express:  WASPI woman described her circumstances as “dire”, especially with the rising cost of living – 20 April 2022

112. Herfordshire Mercury:  Lib Dems works and pensions spokeswoman Wendy Chamberlain MP said “This is a double blow for WASPI women and only adds insult to injury after they’ve been ignored for years.” – 28 April 2022

109. Yours Magazine:  After such a high level response from the previous article about the campaign Yours Magazine asked for an update for their readers.  Here is their double page spread – 5 April 2022

108. Express:  PHSO update ‘We have received further evidence for stage two.  We need to review and consider that evidence’ – 5 April 2022

106. Independent:  Jess Phillips MP “My mother-in-law was a WASPI woman who was promised her pension, and then was left high and dry by the government …who whipped away what she was owed”  – 1 April 2022

102. The Southern Reporter:  Campaigners from the Scottish Borders travelled up to Holyrood for a special reception on Tuesday evening – 30 March 2022

101. Hampshire Chronicle:  Almost a quarter of a million women will have died waiting for pension compensation by the end of this year, according to new figures – 28 March 2022

100. The Portsmouth News:  The coordinator of a Solent group campaigning  for women born in the 1950s has said that these “appalling numbers” the need for immediate action from the government – 28 March 2022

96. CambridgeshireLive: ‘They were not given the tailored and targeted information they required to make reasonable adjustments to their retirement plans’ said Andrew Gwynne MP, joint chair for the APPG for State Pension Inequality for women APPG – 27 March 2022

94. NN Journal: According to current figures there are around 41,800 women in Northamptonshire affected by the issue – 26 March 2022

92. LancsLive: Some women were given one year’s notice for a six-year delay to their retirement – 25 March 2022

91. FT Adviser:  research showed that nearly a quarter of a million will have died waiting for pension compensation by the end of the year – 25 March 2022

90. East Anglian Daily Times: Thousands of Suffolk women are still waiting to hear if the government will compensate them – 25 March 2022

88. Magazine Today:  Andrew Gwynne MP, Co-Chair for the APPG for State Pension Inequality for Women APPG said: “Despite these findings , the Government continues to turn a blind eye” – 23 March 2022

86. Corporate Advisor: WASPI spokesperson Angela Madden said: “that women born in the 1950s were’ ‘financially affected by mistakes made in government.” – 23 March 2022

85. The Exeter Daily:  Andrew Gwynne MP, Co-Chair for the APPG for State Pension Inequality for Women APPG said: “Despite these findings , the Government continues to turn a blind eye” – 23 March 2022

80. Mail Online:  Shocking analysis estimates that 220,000 women will have died waiting for pension justice by the end of this year – 22 March 2022

73. Express:  “The APPG found what WASPI campaign women have known  all along in its submission to the Ombudsman.” says WASPI campaign director Debbie de Spon – 7 Feb 2022

Unfortunately the full and excellent article is behind a paywall but at Paul Lewis’s suggestion on his Twitter feed  “Apologies. Sign up for a free month and then cancel.”

70. Express:  WASPI’s communications director, Debbie de Spon, said: “The IFS report highlights some of the problems that WASPI women have faced due to the insufficient notice the changes to their state pension age” – 26 Jan 2022

69. Southern Daily Echo: A disabled WASPI woman who was forced to work whilst battling cancer is calling on the government – 26 Jan 2022

64. On The Wight: Parliamentary Group says case for highest level of injustice against 1950s-born women’s is ‘overwhelming and clear’ – 21 Jan 2022

59. Daily Mail: “The State Pension age has become a highly contentious issue after Women born in the 1050’s claimed they were not given enough notice that their State Pension age would move from 60 to 66″ – 20 December 2021

58. Mail Online: Dire warnings of another State Pension age increase for people born in the 1970s. Good to see WASPI being mentioned for our own fight. – 16 December 2021

57. The Express: State Pension fury as average sum for women lags behind men – no equality: 14 December 2021

55. iNews: State Pension: WASPI will be in the Dictionary one day, says Campaign as it awaits “fast and fair” compensation – 6 December 2021

The Pensions Management Institute require you to register to view this webinar.

53. Aging Better: Boom and Bust? The last baby boomers, and their prospects for later life. – Video of their report published on 23 Nov 2021

52. Express: The prominent campaign group Women Against State Pension Inequality (WASPI) has fought on behalf of women who feel they were mistreated by the state changes which were brought in with the 1995 State Pension Act. – 18 November 2021

49. East Anglia Bylines: Angela Madden, WASPI campaign chair: “It is time that the government did the right thing and looked now at a fair and fast compensation scheme – 4 Nov 2021

45. The Motley Fool: Almost a quarter of women still don’t know when they’ll get their State Pension and more than a third of people don’t know how much they’ll get – 14 Oct 2021

44. This is Money: Yet more evidence in this letter that the Department for Work and Pensions simply isn’t up to the job -13 Oct 2021

43. Express: WASPI welcome any initiatives by the Chancellor to increase the employment opportunities for the over 50s – 4 Oct 2021

39. Express: The Government was challenged on its decision by the likes of WASPI – 14 Sept 2021

36. Daily Mail: Women forced to wait an extra six years for their state pensions are battling to receive them amid chaos at DWP – 10 Sept 2021 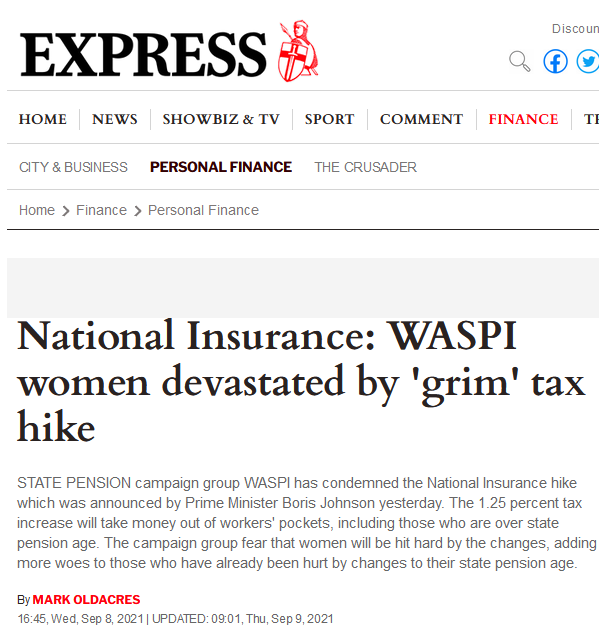 34. iNews: Today the Government has raised taxes and broken the triple lock – 7 Sept 2021

30. South Wales Argus: Women’s State Pension changes in Gwent South Wales. “WASPI are not against equalisation, but they do not accept the way the changes were implemented” – 28 August 2021

29. Woman’s Hour: WASPI woman Jane Cowley interviewed by Anita Rani on Woman’s Hour. Discussion on the increase to our State Pension age without adequate notice. Maladministration by the Department for Work and Pensions confirmed by the Parliamentary Ombudsman – 27 August 2021.

21. Daily Mirror: The Parliamentary and Health Service Ombudsman said the Government was too slow in communicating changes to the state pension age, in what marks an important victory for the WASPI campaign – 21 July 2021

3. This is Money: Ombudsman slams DWP failures in telling women about state pension age delay: What happens now and will they be compensated? – 20 July 2021

2. Daily Mail: Victory for thousands of women in state pension scandal: Ombudsman rules that DWP was too slow to tell women that they would be affected by rising pension age – 20 July 2021

Open letters to the Candidates for Leadership of the Conservative Party

A guide to WASPI: the women campaigning for pension equality