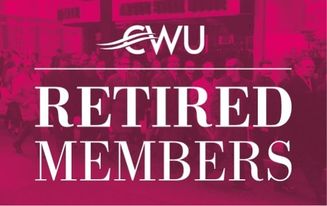 Solent WASPI Woman Sal Robinson shared news of her recent talk to the CWU Retired Members Fringe Meeting at their Union’s National Conference. We look forward to working with them.
A very well attended Retired Members Fringe meeting was held in the Bayview Suite where Tony Kearns, Senior Deputy General Secretary, answered a number of questions raised from the floor and Norman Candy chaired the meeting. The guest speaker was Sal Robinson from the Solent WASPI Community. Sal delivered a very comprehensive speech which explained the background to their campaign, how the campaign had progressed, where they were with the campaign and how the CWU could help them. Their struggle for pensions justice, for women born in the 1950s, has reached a critical stage. The Parliamentary and Health Services Ombudsman (PHSO) has announced that there was ‘maladministration’ over the way that the changes to their retirement age was communicated but despite this, the PHSO is yet to recommend compensation. Numerous questions and words of support were raised by the 70+ members who attended the Fringe and Sal thanked the Union for its support. A motion submitted by the Northern Ireland Regional Committee, Northern Ireland Telecoms Branch and the East London Postal Branch which pledged the NEC and Retired Members Committee to ‘fully support the WASPI women and campaign both within the TUC and the Labour Party for this matter to be brought to a satisfactory conclusion’ was carried unanimously.